A downloadable game for Windows

This full version is a massive improvement over the game jam version and will have a lot of crazy levels set in different time periods and settings like a disco and college frat house and has voxel-based characters that can be bashed and sliced up completely dynamically.

We have a trailer showing some of what's in the current version which you can see just below. Visit the Steam store page to buy it right now or add it to your wishlist.

Your cover has been blown and now the gang you infiltrated won't stop until you're in the ground.

After making Probably Archery last year, we were pretty excited to get involved with the jam again. This time we've made what's basically an extremely over the top bar fight simulator in Paint the Town Red. Lots of persistent blood splattering over the level and tons of various weapons around to bash the gang members with or throw at their faces.

Somewhere around day 5 or 6 when it was really coming together we decided we wanted to make this bigger and bigger. We've had lots of ideas that weren't going to fit in within 7 days so we've launched a Steam Greenlight campaign with the hopes that we can get a big, full version of this game.

There's a few issues, but I'm pretty happy with how it turned out. Hopefully you enjoy it and find the various hidden weapons. We'd really appreciate it if you could take a minute to vote on the Greenlight page: http://steamcommunity.com/sharedfiles/filedetails/....

Oh, and the 'shooter' part of this 7DFPS entry... well you can shoot pool... and throwing stuff is sorta like shooting... and there's also this:

Unzip onto your hard drive and run PaintTheTownRed.exe. 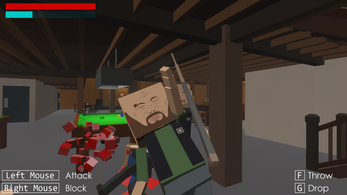 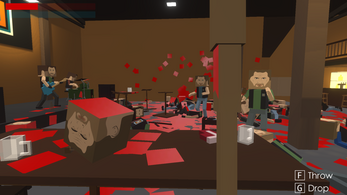 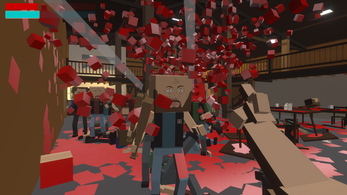 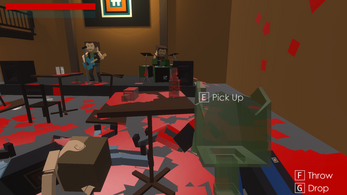